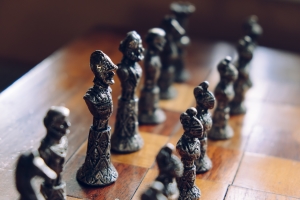 As Moses climbed down the craggy face of Mt. Horeb, you might say he was awestruck. He had just been speaking to a bush engulfed in flames, to the angel of the Lord, and had reluctantly agreed to the impossible task of leading Israel out of Egypt. I AM WHO I AM had spoken, and Moses kept bringing forward new concerns. “Who am I? What will I say? They won’t listen to me. I’m not eloquent.” This culminated with a last ditch effort to get out of this mission, “Oh, my Lord, please send someone else” (Ex 4:13).

But the Lord sent Moses, along with Aaron, to harden the heart of Pharaoh and free his people (Ex 4:22). And after numerous miraculous signs and seeming failure to accomplish his purpose, God delivered his people and plundered the Egyptians (Ex 3:21-22, 13:35-36).

When Moses was on the mountain, he was struggling to believe all that God said He would do. After the exodus from Egypt, Moses didn’t have that struggle anymore. He had seen first-hand how the Lord would make good on all His promises to His people.

By the time we get to Ezra, the exodus no longer looms large in the hearts and minds of God’s people. They are burdened down and cast out. They are oppressed and far away from home. They are now captives of Babylon, the greatest and most powerful nation on earth. They are there because they worshipped other gods and disobeyed God’s words (Jer 25:5-8).

God raised Babylon to accomplish his purpose for Israel and said He would bring them down when He was finished. Consider Jeremiah 25:11-12, 14:

This whole land [Israel and surrounding nations] shall become a ruin and a waste, and these nations shall serve the king of Babylon seventy years. Then after seventy years are completed, I will punish the king of Babylon and that nation, the land of the Chaldeans, for their iniquity, declares the LORD, making the land an everlasting waste. . . .For many nations and great kings shall make slaves even of them, and I will recompense them according to their deeds and the work of their hands.”

Not only has Babylon been sacked, but the new king, Cyrus, is making proclamation that the Lord commissioned him to send all the Israelites back to Jerusalem so they could rebuild the temple (1:2-3). And then he adds that the Persian empire will fund the whole enterprise (1:4)! So the exodus from the captivity of Babylon is going like the first in Egypt—God is moving the heart of the king as he pleases and providing for his people using the funds of their captors.

A few days ago, we were reading the Bible to our three-year-old and trying to explain why Jesus had to die. Among other things, I said, “He had to die because your heart is full of sin.” At that point my worried little boy reminded me, “But it’s just a story, Dad.” To which I replied, “No, this is real, Jesus really died and the only thing people really deserve is to go to hell.” And I could see that my boy was beginning to understand. He was starting to see himself in the story, and Jesus was becoming real.

If we aren’t careful, we’ll treat the experience that Moses had as just another story, and the account of Ezra as nothing but history. Imagine the futility of seeking to persuade an Israelite on the road back from Babylon that this was just a story! Or that God was different now than when Moses was alive.

If we aren’t careful, we’ll live like God isn’t the one moving empires and powers, setting up kings and taking them down, smashing mountains and raising valleys—and doing it all for the good of His people. So let Ezra encourage you to trust God, to rely upon His promises and take them to the bank again and again.

Let the unfolding story of Scripture strengthen you to believe that God really can move whomever He wants for His purpose. The hearts of lost children, of wayward friends, failing spouses, wicked neighbors or pagan kings—these all are subject to the nation-wielding power of God.

LORD; he turns it wherever he will. Proverbs 21:1