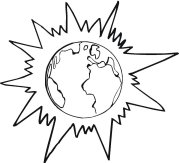 Are you good at imagining? I like to think I am, but I can never imagine well enough to completely understand the Bible story I’m going to tell you today. Try it along with me, and let’s see how you do!

First, imagine what the world would be like with no people living on it. Make us all vanish—you and me, the president, the bus driver, and the ice cream man. Leave no people at all on your imaginary Earth.  And since there are no people, take away everything that people made—buildings, cars, roads, fences, and telephone poles.  Do you have that picture in your mind?

Second, take away all the animals. No monkeys in the trees, no bunnies in the tall grass—imagine they are all gone. Don’t forget the birds flying in the air, or the fish in the sea, or the creepy-crawly things living under rocks. Get rid of all of them. Isn’t the imaginary world quiet and still with nothing living on it?

Now, imagine the world with no plants­­—no trees, no jungles, no fields of grass. You might picture a rocky mountain, a field of nothing but hard-packed earth, or a deep ocean with no seaweed growing in it. Can you see it?

Next, try to take away all the fields and mountains, and all the dry land. Our imaginary world is now covered with water. There are still no people, no animals, and no plants, and now there is no place to stand. Take away the stars twinkling in the sky, and the sun and the moon. In fact, take away all light. Everything is in complete darkness.

Now here’s the part I can’t imagine: Take away the Earth. Now take away the space that the Earth was in. Can you do it? Can you imagine what that was like, when there was nothing?

That’s where the very first story in the Bible begins, in the real time in history when God created the heavens (or space) and the Earth. Before God began creating, there was nothing.

If I were to ask you to make a model of a house, how would you do it? You might use play dough, or Legos, or blocks, or empty boxes. You would make it out of something. You and I can’t make anything out of nothing, but God can. When He created the heavens and the Earth, He made them ex nihilo—which is a fancy way of saying “out of nothing.” Here’s how you pronounce it —

The Bible says, “By the word of the Lord the heavens were made.” He spoke them into being. He just gave a command, and all of outer space was created. He spoke again, and “poof,” there was the world. God divided the sea and the atmosphere with a word, and when He spoke again, dry land appeared, the mountains rose up and the seas were gathered together. God also created plants, birds, fish and animals just by speaking them into existence. Only God could do that.

The Bible says that on the sixth day of creation, God made man out of the dust of the ground. He didn’t have to, you know. He could have made man out of nothing—ex nihilo—if He had chosen to. But instead, He formed man out of the dust and breathed life into man’s nostrils. Can you imagine making a little figure out of mud or play dough, blowing on it and that figure coming to life? I can imagine it, but I can’t do it. God is the only one who gives life.

Did you know that God can give you life, too? He’s already given you one kind of life, the walk-around-breathing kind. But that life will end someday. The more important kind of life is the life that lasts forever. The Bible says that whoever has the Son (God’s son, Jesus) has this kind of life.

You and I can’t go back and see what it was really like when God breathed life into the first man. We just have to imagine it, using what the Bible tells us. But you can ask your mom or dad or your teacher what it was like when they became a new creation. Ask someone who loves God to tell you the story of how God breathed the life that lasts forever into their spirit. You can have that life, too!