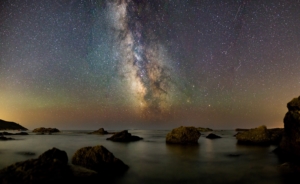 But as is true of all false gods, Science is not actually divine. He is merely the manifestation of limited human intellect and fallen human reason. In other words, he is fallible and not ultimately trustworthy. Being the creation of fallen man, he is prone to deceit. Even if he is correct 99% of the time, the remaining 1% of error or uncertainty makes him a dangerous master to follow, especially if following him necessitates denying the only true God.

Please don’t misunderstand. I am not advocating the discarding or disregarding of scientific research. Science is a valuable tool, increasingly enabling us to exercise our God-given dominion over this world (Gen. 1:26, 28; Ps. 8:3-8). All I am saying is that science has never been, and should never be considered, the means of evaluating and understanding the way things really are, how they will be, or how they came into existence.

The writer of Hebrews makes this plain when he introduces his list of people of faith in the Old Testament by saying, “By faith we understand that the universe was created by the word of God, so that what is seen was not made out of things that are visible” (11:3). Many devoted followers of Science would condescendingly claim that this was an understandably ignorant statement, given the fact that the great scientific discoveries of the 19th-21st centuries were not even on the horizon at this point in time. But the writer of Hebrews was not ignorant, nor were his readers. They were simply believing the inerrant and infallible testimony of Genesis 1, not something discovered by mankind through scientific research, but rather revealed by the God who spoke the world into existence.

The writer’s point, I believe, was to illustrate that it is perfectly normal and rational to believe that a visible reality (in this case the created universe) had its origins in an invisible power (the word of God). None of his readers witnessed the creation of the world by the word of God, yet they believed it to be true. Likewise (as he then goes on to explain in the rest of the chapter), none of the heroes of the Old Testament could actually see the fulfillment of God’s promises made to Abraham, Moses, and the rest, and yet they believed that the same invisible power that spoke the universe into existence—God’s word—also spoke these as-yet-future outcomes into reality. That is the nature of faith: believing God’s word even when there is no available physical or scientific evidence to prove it to be true.

Now again I should clarify my meaning: There is much physical and scientific evidence proving that the universe was created by a master designer—that is, by the God of the Bible. The best available scientific research is for the reality of creation, and against Darwin’s theory (actually, myth) of macro evolution (meaning where once species actually becomes another species over time, as opposed to micro evolution, which acknowledges that changes can and do occur within a species, like the ongoing variations in dog breeds). The scientifically recognizable stamp of God’s design is everywhere, all over His creation, and the most fervent devotees of the god of Science are actually the most irrational people on earth in denying this evidence or dismissing it as religious nonsense. What they lack is faith, insisting that in order to believe we must have the affirmation from their self-made god, Science.

So how did the Hebrews generation “understand” that the universe was created by the word of God without the benefit of the scientific discoveries of the past two centuries? They simply believed. They had faith. Could it be that in some ways they were better off than we are now, not having the loud voice of the god of Science and his zealous followers to contend with in coming to or maintaining their faith? They simply read Scripture or were told of its contents, and they believed—rightly—the very thing true believers believe today. They understood “by faith” just as we must today. And as they examined the world around them and the heavens above them, they saw only affirmations of their faith, with no rational reason to doubt the claims of the Bible. In that sense they made right use of scientific examination and discovery—primitive by the standards of modern science, but nonetheless keeping them grounded in the truth.

Unbelievers have always crafted for themselves false gods—gods of the sun, gods of the moon, gods fashioned after mortal men, fish, beasts, combinations of men with fish or men with beasts, or crawling creatures. How well did Paul describe them when he wrote, “Claiming to be wise, they became fools” (Rom. 1:22). The god of Science is simply the latest in history’s tragic list. As believers, we must not follow him.

Oh, please let it never be said of us, “by science we understand that the universe was created by the word of God.” Instead, let it be always said of us (regardless of how much scientific evidence we find to affirm our faith), “By faith we understand . . .”