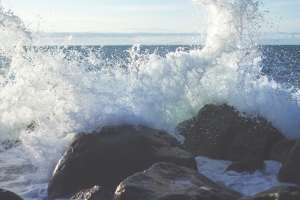 Doubt is deafening. Like the commotion in a crowded hallway that makes your conversation impossible, or a roaring jet engine near your head, doubt has a way of blocking out everything else.

As you listen to the pastor preaching, or read the Bible, doubt screams in your ear, “Do you really believe that.” When trial has overtaken your family again, doubt always asks, “Does God even care?” For the millionth time, it seems, you have failed and you cannot help but wonder, “Does God still love me?”

Doubt is overwhelming, but it is not abnormal. Spurgeon once noted, “The heart that hath never doubted has not yet learned to believe. As the farmers say, ‘The land that will not grow a thistle will not grow wheat.’”[1]

The disciples had some doubts as Jesus walked upon the waves toward them one stormy night. Matthew’s gospel says they were terrified and cried out in fear (14:26). You would have too. Jesus calmed them down and as they returned to normal breathing patterns, Peter spoke up, “Lord, if it is you, command me to come to you on the water,” (14:28). Even though this story was included to show that the Christ was given power by God to control even the natural elements, there is another lesson here that instructs us about doubt.

Jesus said, “Come.” So Peter got out and began to walk toward Jesus, on top of the water. This was surely the supreme maritime experience of Peter’s life. Surfing with no board, striding without sinking, until – he sank. When he saw the wind he began to descend and cried, “Lord, save me.” “Jesus immediately reached out his hand and took hold of him, saying to him, ‘O you of little faith, why did you doubt?’ And when they got into the boat, the wind ceased,” (14:31-32).

Peter doubted Jesus and the result was not encouraging. The waves seemed high because they were and the wind howled loudly because it was strong, and in the midst of mayhem, Jesus stood. Peter wanted that stability, but he wasn’t sure it was Jesus out there. He needed to go closer and get a better look, which meant he needed to walk on water. It was going to take a miracle to get Peter some assurance.

Jesus gave Peter everything he needed. The command and the provision to obey it were issued and Peter got out of the boat. He conquered his first doubt and walked right in to another. Sometimes life is like that. As soon as he set out in faith the waves caught his eye and doubt’s tentacles began to grasp his ankles, pulling him down to darkness.

When Peter saw the wind, he feared and began to sink. The Creator of the universe was right there and Peter feared the creation. Jesus was treading down the waves that he sovereignly controlled and Peter couldn’t see that he was safe, so he cried, “Save me!”

Immediately, Jesus reached down and saved the defeated disciple. Peter was failing and Jesus was rescuing. This is the Son of God. Jesus did not scold Peter as he sank, but questioned him about his faith once he was out of danger. Jesus isn’t out to hit you while you are down, but to teach you as he saves when you cry out to Him.

Peter had a little faith and a lot of doubt. He set his mind to figuring out how powerful the waves were and what ability he had to overcome them and he was afraid. His faith had grown inward and his confidence plummeted. Jesus is the only proper object of faith, and Peter was loosing sight of Him.

Faith that always looks at self and surroundings rather than Jesus has no power over the tsunamis of your life. It is like an ingrown toenail –burrowing downward to the depths of doubt production in your heart. Sometimes, an ingrown faith, like a toenail, needs dug out with a knife. The Lord is willing to perform this surgery and will go to great lengths to remove the problem.

This process of digging is painful and may bring about more opportunities to doubt, but God is at work. When the trial comes, think of the Lord who sustains. When failure and sin begin to weigh heavy upon you, look to the burden bearing Jesus. And when it all crashes down and nothing makes sense, cry out, “Save me.” Jesus comes swiftly.