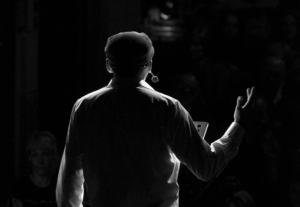 In telling the fictitious story of Barnabas Sackett coming on a ship from England to America in the 1600s, Louis L’Amour describes Sackett’s shipmates like this:  “They were rascals, no question of that, and a dirty, poisonous lot, enough to kill the fish for miles if dumped into the water” (Sackett’s Land, Bantam Books [1974], pg. 71).

In Ephesus, some false teachers had fallen into the waters of the churches in that city (and region), and they were having a poisoning and potentially deadly effect. This is why Paul immediately addressed Timothy, “As I urged you when I was going to Macedonia, remain at Ephesus so that you may charge certain persons not to teach any different doctrine, nor to devote themselves to myths and endless genealogies, which promote speculations rather than the stewardship from God that is by faith” (1 Tim 1:3-4).

Paul’s appeal to his assistant will help us to think about dealing with false teaching in our churches, whether we are in the “infestation” stage or not. Let’s start by considering three questions about the false teachers.

Who were these false teachers? They are called “certain persons” (ESV; “some men,” NASB) in verses 3 and 6. We aren’t told their exact identity. They may have been former elders in the church because, several years previously, Paul told the Ephesians elders, “From among your own selves will arise men speaking twisted things, to draw away the disciples after them” (Acts 20:30). If this was now the situation, the urgency to deal with these men would have been heightened because people might have given them the benefit of the doubt.

What did they teach? Paul calls it a “different doctrine” (1 Tim 1:3). The same phrase is found in chapter 6 and provides further explanation: “If anyone teaches a different doctrine and does not agree with the sound words of our Lord Jesus Christ and the teaching that accords with godliness . . .” (v. 3) These men contradicted the words of Jesus, and consequently did not produce holy people.

In chapter 4, Paul called their teaching a “depart[ure] from the faith” and demonic (v. 1), and highlighted its emphasis on externals (v. 3). Fundamentally, they wanted to be “teachers of the law,” and they taught it both confidently and ignorantly at the same time (1:7)! Specifically, they were infatuated with “myths” (presumably far-fetched stories derived from genealogies in the Old Testament) and “endless genealogies” (i.e., unending discussion about family trees). The gospel of grace was nowhere to be found.

What did their teaching produce? It led to “speculations” (1:4). The false teachers started with Scripture, but went beyond what it plainly says both in its original context and its connection to Jesus. The result was an obsession with “speculative theories” that became “vain discussion” (v. 6).

And it wasn’t as if their teaching was “tolerable,” like a person today who talks too often about the tricky details of Revelation but who, overall, really loves Jesus. No, the false teachers’ devotion to the “deep things” of the law was damnable because it promoted “speculations rather than the stewardship from God that is by faith” (v. 4, emphasis added). God’s redemptive design is salvation by faith and for his people to live by faith. But the false teachers moved people away from that to a “different doctrine” producing “envy, dissension, slander, evil suspicions, and constant friction among people” (6:4b-5a). The gospel was stamped out as they majored not only on the minors, but the obscure! The consequences were devastating.

In dramatic contrast to the false teachers, Paul reminded Timothy, “The aim of our charge,” the goal of apostolic preaching and teaching, “is love that issues from a pure heart and a good conscience and a sincere faith” (1:5). The false teachers “swerv[ed] from these” (v. 6) and instead produced divisive hearts, guilty, confused consciences, and hypocrites (not “sincere faith”). Love won’t ever flow out of that!

First, church leaders must “charge certain persons not to teach any different doctrine.” No church leader should like this responsibility, but they all should willingly engage when necessary.

Second, church leaders should consider the fruit of their ministry. Are you seeing people grow in their love for the Lord and one another, or is something else produced by your ministry to them? Love will never flow out of an atmosphere of speculative theories and strife, but a culture of worshipping and listening to Jesus.

Third, believers must watch out for Bible teachers who major on the minors (or the obscure) to the neglect of the gospel and the “plain things.” Saying something a tad strange is normally not a problem. But when weirdness becomes the norm and Christ is overshadowed, beware! And think about it: we will go our whole lives and never achieve a full understanding of Jesus and his teaching. Why would we ever want to stray from something, and SOMEONE, so magnificent?