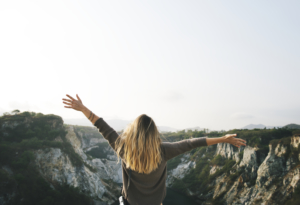 I spent a good part of my life hiding, ashamed of sins I had committed in thought, word, and deed—desperate for people to accept the false identities I fought hard to maintain. Right up to the day of my conversion, one of the most often reviewed fears in my heart was that people would find out who I really was.

When Jesus stopped in Sychar of Samaria, on his way north to Galilee, he met a woman who was hiding. Tired from his long journey on foot, and needing a reprieve from the heat at noonday, he found a well and sat down. His disciples surely would have gotten him some water immediately, but John tells us they were off buying food, (4:8).

Then he saw a woman carrying a jar. She had come to draw water from the well. It’s likely that this woman was trying to go about her business unnoticed because she came to the well at a time when others wouldn’t be around. Morning and evening were the popular times to get water.

Explaining further, Jesus helped her see that he could give her water that would quench her thirst forever. That was something she wanted desperately. “Sir give me this water, so that I will not be thirsty or have to come here to draw water,” (4:15). Finally, the woman was interested in what Jesus had to say. If it were possible to never be thirsty again, she would never have to show her face at the well.

But Jesus had more to say, “Go, call your husband, and come here,” (4:16). Why was he asking that? The woman told Jesus that she had no husband, and he agreed saying, “You have had five husbands, and the one you now have is not your husband,” (4:17). Everyone in the town knew this already. She couldn’t hide her sin but was avoiding shame by drawing water at noon. But how did this stranger know? Could he really give her what he promised?

What are you hiding?

Is there something about your present or past life that you would rather not talk about? You may be succeeding in keeping it hidden, or you may be avoiding more exposure like the woman in the story. She had been rejected by numerous men and fellow citizens until this prophetic Jewish man began to draw her in.

There by Jacob’s well, Jesus, knowing the depth of this woman’s sin and shame, offered her forgiving acceptance. Not just a fresh start but an eternal life. The story continues with her explaining to him that she knew of the coming Messiah who would, “tell us all things,” to which Jesus replied, “I who speak to you am he,” (4:25-26). She believed him. He had already demonstrated knowledge of things he could not have known otherwise.

And then she went back into town, already so free, speaking to any who would listen, “Come and see a man who told me all that I ever did. Can this be the Christ” (4:29)?

Let’s be honest. Jesus isn’t scrolling through social media trying to figure out who you really are. He already knows. And because of his cross-work he is able and willing to give you what you deeply need. He is able to quench your thirst to belong. Jesus is the giver of eternal life who knows everything about you and yet reveals himself as the fullness of forgiving love for you. In him you are fully known and fully accepted. Your shame is covered. Your guilt is removed. You are free.