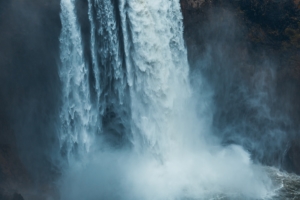 When you think of the mighty deliverance that God provides, what image comes to your mind?

Earlier this week I heard the cry from my youngest son, “Help! Dad, I’m stuck!” I was working alongside my dad and my boys on a piece of agricultural equipment. My son had climbed up on top of it and managed to wedge his foot in between two pieces of the metal frame. When I got over to him, he was a bit twisted, but not too hurt, and still yelling, “Help!”

Well, what did I do? I used my strength (he’s only 4) to lift him up out of the bind and set him down on the solid ground.

Many images of God’s deliverance that come to my mind are like that, but on a much more massive scale. In fact, my expectations of how God works are built on his consistent displays of power toward those in need.

When you think about God, I’ll bet that your expectations of his greatness and power are similarly shaped by some of his more amazing displays: the creation of the world from nothing, the global flood which wiped out all but eight people, and the extensive plagues and mighty deliverance of Exodus.

These are the expectations that we drag along with us to to the cross as well, but what do we find there?

Isaiah 52:13 starts off arguably the most memorable passage about the cross in all of the Old Testament saying, “Behold my servant shall act wisely; he shall be high and lifted up, and shall be exalted.”

The logic here seems clear, Jesus will do what is required and ultimately find success. This is the meaning of “act wisely” which can be translated “prosper, or will succeed.”

The wise action and exaltation of 52:13 are contextually tied back to 52:10, “The LORD has bared his holy arm before the eyes of all the nations, and all the ends of the earth shall see the salvation of our God.”

So, this exaltation of Christ is about God’s holy arm (i.e. his power) and the salvation of the ends of the earth. Sounds like another one of God’s great deliverances, right?

No Semblance of Humanity

If the text went on to describe the majesty, wealth, influence, and display of power that the promised Messiah was sure to bring along with him, we likely wouldn’t think it out of place.

However, we know it is out of place because of what actually does follow. The language of being wounded for sin, crushed by the Lord’s will, afflicted, and despised and rejected set the tone for the whole passage (52:13-53:12).

Verse 14 starts this descent, “As many were astonished at you—his appearance was so marred, beyond human semblance, and his form beyond that of the children of mankind—” Isaiah moves from the total success of Jesus to him not being regonizable as a human in one verse. How can that be?

The Power of the Cross

The Apostle Paul will say in Romans 1:16 that “the gospel is the power of God unto salvation,” and in 1 Corinthians 1:18, that the “word of the cross is folly to those who are perishing, but to us who are being saved it is the power of God.”

The terrible beauty of Isaiah’s introduction of Christ as one who succeeds and one who is disfigured beyond recognition is an introduction to the power of the cross itself. For Christ who was numbered with the sinners, would make many righteous. Christ who was humiliated in suffering and death, was exalted in great glory. Christ who was despised and rejected, who was forsaken under the mighty hand of God—this is the Christ who can save you and who will never reject you.

The cross, says Isaiah, is where the holy arm of God is on display.

Therefore, the image in our minds of the greatest deliverance ever accomplished by God, ought to be God himself hanging unrecognizably marred upon a cross, and that he really died, and that he truly lives.