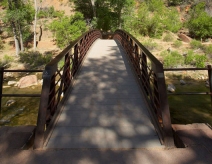 Thomas Chalmers, a pastor in Scotland in the 1800’s, visited an elderly lady one day who was not a believer. He talked to her for hours about Christ and her need to believe. The lady didn’t want to believe because she thought she would be saving herself. Chalmers explained that faith is God’s gift, but she continued in her unbelieving state and he eventually had to leave.

In order to get to the pathway home, Chalmers had to cross over a strong bridge that spanned a stream in the lady’s yard. But instead of walking right over, he stopped short of the bridge and looked it over. Then Chalmers reached down and touched it and fearfully jumped back. He did this several times. The elderly woman saw it all from her window. Finally, when she ran out of patience, she cried out to Chalmers, “Lippen till it! Lippen till it!” She was using an old Scottish phrase that means, “Trust in it,” or “Depend on it.” Immediately Chalmers yelled back to the woman, “Depend on Jesus Christ. He’s as safe as the bridge. He’ll bring you across!”

Is that true? Is Jesus the only way to God? Is He the Savior of sinners? Yes, but only if He was resurrected from the dead.

Paul then explains the tragic consequences if Jesus was not resurrected:

“And if Christ has not been raised, then our preaching is vain, your faith also is vain.” (v. 14)

If Jesus’ bones are still buried somewhere in Israel, then the message the apostles preached was worthless rambling. Furthermore, faith in their false message is empty and pointless.

“Moreover we are even found to be false witnesses of God, because we testified against God that He raised Christ.” (v. 15)

If Jesus is still dead, the apostles lied by saying God did something that He actually didn’t do, and the New Testament loses its veracity.

“And if Christ has not been raised, your faith is worthless; you are still in your sins.” (v. 17)

If Jesus is not alive, then the penalty our sins deserve has not been paid—Jesus did not take the place of sinners on the cross and face God’s wrath for them. To eliminate the resurrection is to deny the atonement.

“Then those also who have fallen asleep in Christ have perished.” (v. 18)

To ‘fall asleep’ is sometimes the way Scripture speaks of Christians dying. It’s a very hopeful picture. But if Jesus was not resurrected, those who died believing in Christ actually have no advocate with God and therefore an eternal hell to endure.

It’s no wonder that Paul says, “If we have hoped in Christ in this life only, we are of all men most to be pitied” (v. 19). If Christ perished, following Him and suffering for him is foolish and deserves the pity of the whole world.

However, something changes everything: “But now Christ has been raised from the dead” (v. 20). Therefore, the apostles in fact told the truth and what they had to say was truly good news. Furthermore, faith in Christ really matters, and those who trust in Him are not still in their sins. Finally, those who die “in Christ” do not perish, but they enjoy everlasting life.

“For God so loved the world ,that He gave His only begotten Son, that whoever believes in Him shall not perish, but have eternal life. For God did not send the Son into the world to judge the world, but that the world might be saved through Him.” (John 3:16-17)