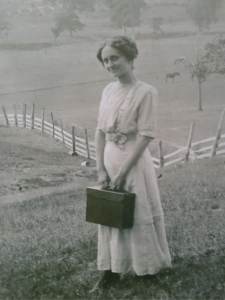 My grandmother Elliff was a presenter of the gospel. Are you? She looks harmless, but in the small case in this photo was a sawed-off gospel shotgun!

One day a tramp came to her screen door asking for food. Grandmother and her pastor husband lived close to the train tracks and this was not an uncommon experience during those days. Always accommodating, she asked the man to remain at the front door while she went back to get him something to eat.

In the kitchen my grandmother found some cheese in the ice box, took it out, and sliced off a large piece with her butcher knife. She then remembered how important it would be to speak of Christ to this man. So, carrying the cheese in one hand and the butcher knife in the other, she made her way across the living room to the screen door. Wasting no time, she shook the butcher knife eye level in front of him as she said, “Are you prepared to meet the Lord?”

I guess he wasn’t—at least not then. He turned and ran away from her as fast as he could, without the cheese!

I’m so very grateful for my grandmother’s zeal for the gospel. She could have been many other things perhaps, but chose a life that made a difference. In heaven she has likely already met up with “her joy and crown,” the people she led to the Savior.

She Prayed for People

We all say we pray for others, but grandmother was faithful and fervent. She kept lists of unconverted people to guide her. She didn’t pray sheepishly, passively, or casually. She pressed the Lord for the conversion of those she had on her heart that they would escape the judgment to come.

We can do this also. I’m persuaded that we become passive in prayer when we don’t realize the urgency of the situation. If some family member or friend were in a burning building, we would act frantically and likely very courageously to save them. We should carry that concern over into our praying. James said that the “fervent prayer of a righteous man avails much.” Eighteenth century pastor Charles Spurgeon said that “praying without fervency is like hunting with a dead dog.”

Over the years I’ve noticed that God answers the prayers when I really cry out to him. Perhaps this is just a way of indicating that we really care if the prayer is answered. Add the fuel of fervor to your praying.

She Didn’t Forget the Children

Yes, the grocery man and the filling station man and the neighbor woman were on there, but also the children. It’s a well-known fact that she was privileged to lead many children to Christ in her lifetime. When a child is converted to Christ, both a soul and a life are saved. I mean by this that the child has a whole life of service to God on this earth redeemed by Christ’s saving work, a life span that is already wasted in an older convert.

Do you think of the children? Right now, let those faces come before your mind. They need Christ as well. I’m aware that there are dangers when we deal with children since they are so easily persuaded. We want true converts to Christ. But trust God and venture into their lives with the Christ who gathers children to himself. Put lots of gospel kindling into their lives that will ignite when they believe. Call them to Christ.

She Wasn’t Ashamed to Speak the Gospel

She wasn’t eloquent at all. But embarrassment about the gospel was not in her makeup. Now that’s a big hurdle to overcome, but she believed that the gospel was truly the best news anyone could possibly hear. She REALLY believed that. She knew that anyone who mocked her then was not going to mock when Christ comes back. She knew that God could save anyone, even the most incorrigible of people. So, she spoke up. And God rewarded her with true converts to Christ.

I can’t think of anything that my grandmother possessed that cannot be true of each of us who believe in Christ. In our own way, with our own personality, and with loads of sincerity, we can be instruments in God’s hands. We may not be privileged to lead so many to Christ as she. Few will. But we can be in that number of those who sow gospel seed for the glory of God. And, we may be the tool God uses to open the door for generations to follow Christ.

Live for something worth your life! Be remembered as a presenter of the gospel.