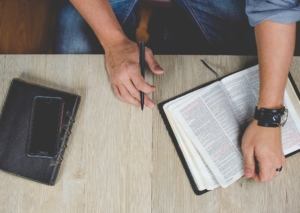 Once, when a large crowd was present, Jesus told a parable about a sower sowing seed (Luke 8:4-8). He explained that some of the seeds fell on hard ground and were immediately snatched up by birds. Other seeds fell on shallow rocky soil. They sprouted, but then withered in the heat because the roots could not go deep enough to find moisture. Still other seeds fell on deeper soil. These also sprouted, but were choked out by the thorny weeds that also called this soil home. Finally, some of the seeds fell on deep, fertile, prepared soil with no weeds. These seeds sprouted and produced a healthy crop for the farmer.

When Jesus finished giving this simple farming illustration, He did not explain to the crowd what the parable meant in terms of spiritual realities. Instead He said, “He who has ears to hear, let him hear” (v. 8). It was as if He were saying that only some had the ability to understand the parable, while others did not. Only some of the people listening had “ears to hear.”

If you had been in this crowd, what would you have done when Jesus finished with this strange comment about “ears to hear”? What if He just turned and walked away with His disciples at this point? What if you really didn’t understand the meaning of His parable? Would you be satisfied to let Him go, or would you pursue Him with questions?

Many in this large crowd were satisfied to let him go. Some may have walked away puzzled, shrugging their shoulders or scratching their heads. Some may have been simply disinterested, or too busy with their lives to spend valuable time thinking about what this traveling preacher had said. Perhaps others felt that Jesus’ teaching was too cryptic—too difficult for the average person to understand. Some may have even been angry at Him for not following His illustration with application. They might have complained, “A good teacher would have explained the meaning of the parable so that everyone could understand.”

Jesus’ disciples, on the other hand, were unwilling to go away unsatisfied, for any reason. They felt an important need to know what He meant by the parable, and so they asked Him what He meant (v. 9).

Keep in mind that at this point Jesus’ disciples understood no more about the parable than those who had walked away angry, or puzzled, or disgruntled, or disinterested. At this point they did not appear to have “ears to hear” any more than anyone else. Yet Jesus responded to their earnest questions by saying, “To you it has been granted to know the mysteries of the kingdom of God, but to the rest it is in parables, so that seeing they may not see, and hearing they may not understand” (v. 10). He then went on to explain—to those who asked—what His farming illustration meant (vv. 11-15).

If someone else in that large crowd had stuck around with sincere and honest questions for Jesus, do you think He would have said, “Sorry, but you’re not on the list”? Of course not. So then, if you come to Jesus through prayerful searching of His Word, earnestly and honestly seeking the understanding that leads to salvation, do you think that you will be rejected? I can promise you, on the authority of God’s Word, that if you open your Bible and seek the truth with all your heart, you will find what you are seeking.

It might be said that the truth that leads to salvation is distributed by God on a “need to know” basis. How badly do you need to know what God is saying in His Word? Frankly, if you can do just as well without it, then you have no reason to believe that He will reveal it to you. On the other hand, if you sense your need for the truth the way a parched man senses his need for water, then you are not far from having your thirst quenched.

All that the Father gives Me will come to Me, and the one who comes to Me I will certainly not cast out. (John 6:37)