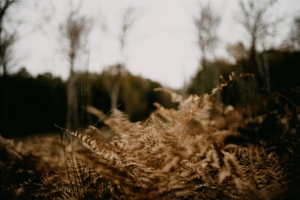 Some lepers in Jesus’ day had it worse than others. We know of one man in the Bible who had a severe case of leprosy because Luke writes, “While he was in one of the cities, there came a man full of leprosy” (5:12a). Did you see it? This man was full of that dreaded disease. How sad.

He probably had a non-functioning nervous system. His body’s extremities — toes and feet, fingers and hand, nose — had no feeling. A hot surface, or the freezing air, or a sharp edge, all did their damage without even a wince on the man’s face. The result might have been a partial nose, or possibly stumps instead of hands. Alternatively, his extremities might have been intact, but his skin was covered with sores and scabs.

But not only did this man suffer physically, he also suffered emotionally and religiously (see Leviticus 13-14). Those with leprosy were forced to live outside of their local communities and families; they were quarantined in leper colonies several miles outside of town. Sometimes, a “normal” person would venture out into the countryside and come upon a leper. As soon as the leper saw the person, he was required to yell, “Unclean! Unclean!” so that the “clean” person was not contaminated.

Could lepers ever recover? In Jewish law, a leper was ceremonially unclean, but could be welcomed back into his worshipping community and family if a priest declared that the disease had gone into remission. Otherwise, lepers lived without normal interaction, and the realistic prospect was this was going to be their state until death. He was probably told by many that this was the God’s judgment, and he believed it. He was lonely. He was hopeless. He was miserable.

But then one day he heard about Jesus, the Promised One, the Servant of Isaiah, who was sent to “proclaim good news to the poor” and “proclaim liberty to the captives and recovering of sight to the blind.” This is the One who came “to set at liberty those who are oppressed” (Luke 4:18). Fully aware of his repugnant state, I can imagine him thinking, “I’ve got to find this man. Maybe there’s hope even for me.” Recognizing his dreadful situation, the only reasonable response was to seek the Lord while he could be found.

Once the leper came upon Jesus, “he fell on his face and begged him, ‘Lord, if you will, you can make me clean’” (5:12b). He knew that Jesus could heal him, but didn’t presume that he would. There was no arrogance in his approach. How could there be, considering his miserable condition?

Jesus responded in two wonderful ways. First, he “touched him” (13a). Onlookers would have gasped at Christ’s audacity and thought that this would make him ceremonially unclean. But a new day had arrived — a season of amazing reversals sometimes accompanied by the tender touch of Jesus.

And then, second, Jesus said, “I will; be clean” (13b). At that moment, sores were filled and scabs fell off and were replaced with fresh, healthy skin; rashes began to fade away; maybe fingers and toes began to grow back; and for the first time in so long, this man felt the warm sun on his face. Jesus wasn’t made unclean; this man was made clean. Jesus is the Son of God who has all authority over disease, and also the religious realm. This man wasn’t just healed physically, but he could now be restored spiritually (v. 14). And what was his new cry? “I’m clean! I’m clean!”

J.C. Ryle shows a parallel between our lives and the leper when he asks, “What are we all but spiritual lepers in the sight of God? Sin is the deadly sickness by which we are all affected. It has eaten into our vitals. It has infected all our faculties. Heart, conscience, mind, and will, all are diseased by sin” (Expository Thoughts on Luke, monergism.com). So, first of all, like the leper, we are in a horrendous predicament — we are born sinners at heart, enslaved to sin, enemies of the holy God who must judge sin.

But, second, like the leper, we can be rescued immediately out of our horrendous predicament by Jesus Christ. Just as Jesus laid hold of this man’s diseased flesh in order to heal him, so Jesus became flesh in order to heal sinners spiritually. While remaining God, he became man to die as a substitute for sinful humans, paying their penalty so that they could be cleansed from the defilement of sin and forgiven and reconciled to God. His resurrection testifies to the reality of this only way of salvation.

But knowing this is not enough. Like the leper, we must flee to Jesus in order to be saved from our horrendous predicament. The leper knew he had no power to deliver himself, so he did whatever it took, even going against social norms, to find Jesus. There was nowhere else to turn, and nothing else more urgent to do. If you have not come to Christ, there’s nothing more important and pressing in your life than to flee to this Savior of sinners who is willing to make you clean!