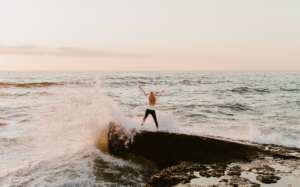 Christians are people who have been saved by the grace of God through the sacrificial, substitutionary death of Jesus Christ. Not a single person will attain to eternal life as a reward for his own moral perfection, but only through the grace of God in Christ Jesus. As true and as glorious as this is, the genuine Christian life is also one of personal victory over sin rather than continuing slavery to it. I am not describing moral perfection, but I am describing a general pattern of victory over the sinful passions of the flesh. As John wrote, “No one born of God makes a practice of sinning, for God’s seed abides in him, and he cannot keep on sinning because he has been born of God” (1 John 3:9).

Paul addressed this in Romans 8:12-13 when he wrote, “If you are living according to the flesh, you must die; but if by the Spirit you are putting to death the deeds of the body, you will live.” As a Christian, you must fight this battle. In fact, if you really are a Christian, you are fighting this battle. You are not enslaved to the sinful passions of your flesh, but you are engaged in a seemingly never-ending war against them.

As with any victory in any war, your victory over sin will be the result of you employing every available weapon against this deadly foe. Your weapons for this fight do not come from your own resources. They are supplied by God, revealed in the Bible, and deployed in battle by the power of his Spirit. Even so, you are not passive in this fight. Instead, you must build up your God-given defenses, stay awake and alert, aim the rifle, and pull the trigger—again, and again, and again.

These are your weapons of warfare, the elements of your victory over sin:

To experience victory over sin, you must know and meditate on truth—not only the glorious truth of what Jesus did for you on the cross, but also what God has done in you through his Spirit. You were dead in your trespasses and sins, but God has made you alive in Christ Jesus (Eph. 2:1-5). You live in a body that is inclined toward sin, and the old you was well-versed in sinning. But the old you is dead, having been crucified with Christ. The new you has been raised with him to walk in newness of life (Rom. 6:1-11; Gal. 2:20; Col. 3:1-3). Your new heart is an honest and good heart (Luke 8:15; cf. Luke 6:43-45), not like the old one that was characterized by corruption and deceit (Jer. 17:9-10). Meditate on these truths, keeping them in the forefront of your thinking. Then, conduct yourself according to who you really are, not according to who you were before Jesus saved you. As a Christian, walk in righteousness, “seeing that you have put off the old self with its practices and have put on the new self, which is being renewed in knowledge after the image of its creator (Col. 3:9-10).

As strong as your good intentions may be to avoid sinning, you are still weak in the face of temptation. Never under-estimate the deceitfulness of sin. Prayerfully rely on God to deliver you daily from the sins that so easily entangle you. As Jesus commanded just hours before Peter denied him three times, you must “Watch and pray that you may not enter into temptation. The spirit indeed is willing, but the flesh is weak” (Mark 14:38).

Just as you should never under-estimate the deceitfulness of sin, you should never over-estimate your ability to resist it. Acknowledge your own areas of weakness and keep away from them. Do you struggle with lust? Do you struggle with the sinful use of alcohol? Wisdom would tell you to stop engaging in activities that bring these temptations to your doorstep. As Puritan Thomas Brooks wrote, “He who will be so bold as to attempt to dance upon the brink of the pit may find by woeful experience that it is a righteous thing with God that he should fall into the pit!” Or as Paul wrote, “Let anyone who thinks he stands take heed lest he fall” (1 Cor. 10:12).

Christians are never taught in the Bible to go it alone. The Bible gives no hint of instruction that would lead a Christian to prefer the life of a self-sufficient loner. Your life as a Christian is designed by God to be lived out in a committed and submissive relationship with other believers. As the Proverb says, “Whoever separates himself seeks his own desire; he quarrels against all sound wisdom” (Prov. 18:1). Believers are taught to encourage, exhort, and even rebuke each other when necessary (Prov. 27:6, 17; 28:23; Matt. 18:15; Luke 17:3-4; 1 Thess. 5:14; 5:11; Heb. 3:13). You need this committed and honest relationship of accountability with other believers. You need to be in faithful membership with a local church. This is God’s design to see you safely through this life just as surely as the ark was his design to see Noah and his family through the flood.