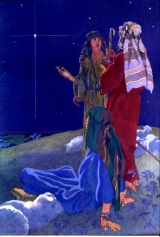 They sat side-by-side on the hillside, silently gazing into the starry sky. Finally, the boy spoke. “Would you tell me about that night, Jacob?” The old man said nothing.

The boy asked again. “Please, Jacob. I won’t laugh at you. I really want to hear the story.”

The old man finally turned toward him. “No matter, Peter. The laughing doesn’t bother me anymore. My thoughts just don’t come as quickly as they did 70 years ago.”

“So it’s been that long? Seventy years?”

“More than 70. I was about your age—just a lad. But I remember . . . as if it were last night.” He stared nowhere in particular, his mind lost in another time.

“And the others with you, Jacob? Were they older?”

“Yes. I was the youngest—and probably the most afraid.”

Peter paused a moment, then whispered. “Tell me. Please.”

Soft words came at last. “We were alone on the hillside, watching over our sheep—just as you and I are tonight. Then instantly, like a lightning bolt from heaven, an angel stood among us. His blazing clothing blinded us and lit up the whole hillside. . . .”

The old man paused as the boy interrupted, each thought tumbling over the next. “Did the angel speak to you, Jacob? What did he say? Were you frightened?

Jacob was sober in his recollection, as one who had told the story many times.

“His message stunned us. After thousands of years, the Messiah had finally come! But He would not be the king we were expecting. We would find him lying in manger in a stable in Bethlehem. We didn’t understand, but were too terrified to speak. Even Eli, who seemed as big as Goliath to me, could not stand up.”

Peter could hardly utter his next question. “Then what happened, Jacob?”

“When that angel had spoken, the heavens exploded with countless others, all singing and praising God. But like the light from a snuffed candle, they suddenly disappeared, leaving us in darkness again.”

“It was then you went to Bethlehem?”

“Yes. Eli took off first, and I struggled to keep up as best my short legs could. We ran from stable to stable until we found the Child the angel had told us about.”

“Jacob, the boys in the village say you dreamed all these things.”

“Yes, I’ve heard their talk. But they are mistaken. We all saw the Child . . . and touched Him. Flesh and blood are no dream.”

“They say you are just an old man who makes up tales about the Child to sound important. All of the other shepherds you claim were with you have been dead for many years, and there is no one left alive to prove your story. They call you ‘The Last Shepherd’ to make fun of you.”

“It is true that I am very old and have outlived all the others who ran to Bethlehem that night. But I am not The Last Shepherd, Peter.”

“What do you mean, Jacob? You said that the others were dead.”

“They are indeed. But there was another shepherd in the stable that night who still lives. He is The Last Shepherd.”

“But how can there be another shepherd, Jacob? I don’t understand.”

The Child, Peter. The Child. Do you know what He called himself when He grew up?”

“He is also the Last Shepherd, for no other shepherd will ever come after Him to guard and protect His flock.”

“But can He prove your story?”

“Tell me, Peter. How do you get your sheep to come to you?”

“I call them by name, and they come. First one, then another, until all are safely in the fold.”

“Exactly. And everyone who sees them respond to your call knows for certain you are their shepherd. And so it is today with The Last Shepherd. He calls His sheep one by one, and they go to Him as they hear their names. But a day is coming when He will call all that remain, and the entire flock will go to Him at once. Then those who disbelieve will begin to understand.”

“I think I see, Jacob, but when will this happen?”

“I don’t know, lad. I don’t know. But with each passing year, I long more and more to hear Him call my name. I hope to hear it on a night much like tonight, here on the hillside, gazing into the heavens and guarding our sheep.”

“Could it be tonight, Jacob?”

The sheep hear his voice, and he calls his own sheep by name and leads them out. (John 10:3, NASB)