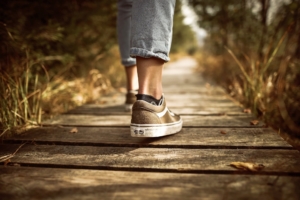 When it happened, it took everyone by surprise. Another well-known Christian writer and speaker publicly renounced his faith in Christ, letting everyone know he no longer considers himself a Christian. It was very discouraging news for believers, especially since, in addition to betraying Jesus and his church, he also publicly endorsed a perverse social philosophy and the corresponding lifestyles that are completely contrary to the gospel. In a word, this man committed spiritual treason by offering support and encouragement to the enemies of Christ.

But enough about him. How about you? Is your professed faith in Christ a thin veil for unbelief and worldliness? Do you feel yourself leaning more and more sympathetically toward the same kind of ungodly thinking and living? Do you find yourself listening to, and even believing, the same cultural message that inspired this well-known believer to abandon Jesus and betray his church? Do you want to go away as well?

Jesus asked this very question of his twelve closest disciples after many other disciples “turned back and no longer walked with him” (John 6:66). They left because his “Bread of Life” message (see John 6:22-59) did not fit within their cultural comfort zone, within what was “acceptable” to other religious leaders and teachers of that time.

Those who left him tried to portray his message as too difficult to understand (John 6:60). But Jesus knew their hearts, describing their response for what it really was: “grumbling” and “taking offense” (6:61). He knew that what they wanted from him was earthly provision and a message that fit comfortably within the framework of “socially acceptable” religious teaching and philosophy, which at that time was Judaism and life under the Law of Moses. He knew, in other words, that it was not that they didn’t understand his words; in reality, they hated and therefore rejected them. And so, after the many left him, he turned to the twelve and asked, “Do you want to go away as well?” (6:67).

Peter’s immediate response, on behalf of the twelve, was perfect and filled with important meaning for you and me: “Lord, to whom shall we go? You have the words of eternal life, and we have believed, and have come to know, that you are the Holy One of God” (6:68-69).

Peter’s response does not imply that the twelve fully understood everything Jesus had taught, but it was also not the result of blind or ignorant religious loyalty. It was a fully rational response based on the truth of who Jesus is, and motivated by a godly self-interest that truly sought the best possible outcome for himself and for the other eleven.

Here’s how I see Peter’s flow of thought, which is best seen by thinking through his response in reverse order:

First, Peter and the rest had become convinced of who Jesus is: “the Holy One of God”—the Messiah promised in the Old Testament Scriptures. They had just seen him miraculously feed five thousand (or perhaps more) people with five loaves and two fishes. They had seen him calm the raging sea, claim personal lordship over the Jewish Sabbath, and heal many, even proving he had the authority to forgive their sins. They knew who he was.

As a result of their logical, rational self-interest, Peter proclaimed their unwillingness to depart from Jesus, on the basis of the fact that he was the Messiah, whose message (even if counter-cultural or offensive to worldly thinkers) would naturally be the only message that could truly save. To go to anyone else, or to prefer any other supposed message of salvation, would represent the height of irrational “reasoning” and self-destructive behavior. The one and only true message must logically be the only one to believe.

So how about you? Are you truly convinced that Jesus is who he says he is—the Son of God and the Savior of Mankind? If so, then you, like Peter, will understand that there is no other saving message than the one Jesus brought—the one found in the pages of the Bible—the one that challenges and condemns the perverse thinking of this world, but saves those who persevere in faith to the end. There is literally nowhere else for you to go.