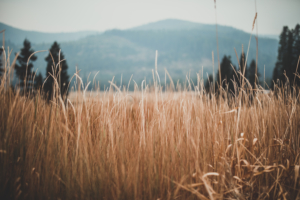 In Daniel 2 we read about Nebuchadnezzar’s dream. Daniel, to whom God revealed the dream and its interpretation, explains to Nebuchadnezzar what he saw: a statue with a head of gold, chest and arms of silver, middle and thighs of bronze, legs of iron and feet of iron mixed with clay. A stone, “cut out by no human hand,” strikes the image on its feet and destroys it entirely, scattering it to the wind.

As Daniel goes on to explain, the head of gold is Nebuchadnezzar and his Babylonian kingdom. Another kingdom (known in history as that of the Medes and Persians) follows, represented by the chest and arms of silver. A third kingdom (the Greeks under Alexander the Great) comes next, represented by the middle and thighs of bronze. Finally comes the powerful, brutal, but internally corrupt and ultimately fragile Roman Empire, represented by the legs of iron and feet of iron mixed with clay. The mysterious but conquering stone that destroys this image is then historically pinpointed in 2:44:

And in the days of those kings [i.e., during the historical time of the Roman Empire] the God of heaven will set up a kingdom that shall never be destroyed, nor shall the kingdom be left to another people.

In Daniel 7:1-14, Daniel sees his own dream: four great beasts rising out of the sea. The first beast was like a lion with eagle’s wings, the second like a bear that would arise and devour much flesh, and the third like a winged leopard. The fourth beast was given no specific animal identity, but was “terrifying and dreadful and exceedingly strong.” It had “great iron teeth” with which it “devoured and broke in pieces and stamped what was left with its feet.”

But then, in Daniel’s vision, “thrones were placed” (v.9, note the plural, indicating that there were at least two thrones). On one of these thrones, One took his place who can only be rightly understood as the God of heaven (vv. 9-10). To him comes another, “one like a son of man,” to whom was given “dominion and glory and a kingdom, that all peoples, nations, and languages should serve him” (v.13). And fittingly, “his dominion is an everlasting dominion, which shall not pass away, and his kingdom one that shall not be destroyed” (v. 14). During this inauguration, the fourth beast is killed and its body destroyed (v. 11), and the rest are stripped of their dominion (v. 12).

The similarities between these two dreams are striking: four objects, creatures, kingdoms in succession, the fourth in both dreams being supremely terrifying and powerful, having the characteristics of iron, but ultimately overcome and replaced by an everlasting kingdom ordained by the God of heaven. Furthermore, logic dictates that where there is one God-ordained kingdom that has a beginning, that conquers all other kingdoms, and that has no end, there cannot possibly exist a second kingdom that bears those same characteristics. Therefore, the final everlasting kingdoms described in both visions must be one and the same. And if the one began during the historical Roman Empire (as Daniel 2:44 makes clear), then the kingdom described in Daniel 7:13-14 necessarily began at the same time, because it is the same kingdom.

It is also not difficult to explain the differing forms in which the dreams were given, while still understanding them to refer to the same historical sequence of events. Nebuchadnezzar is shown the four kingdoms according to their earthly splendor and strength (gold, silver, bronze, iron), along with their earthly weakness (i.e., iron does not mix with clay). Daniel, on the other hand, was shown more of a spiritualized, behind-the-scenes look at the same four kingdoms: despite their earthly glory, they were best compared to hideous beasts, characterized by greed and power and bent on conquest and destruction. Nebuchadnezzar was shown these kingdoms according to what man would naturally see in them. Daniel was shown them the way God sees them, and the way he wants his people to see them.

Peter, explaining the significance of the resurrection of Christ and his ascension into heaven, couldn’t have been more clear:

For David did not ascend into the heavens, but he himself says, “The Lord said to my Lord, sit at my right hand, until I make your enemies your footstool” [quoting Ps. 110:1]. Let all the house of Israel therefore know for certain that God has made him both Lord and Christ, this Jesus whom you crucified” (Acts 2:34-36).

It is Jesus who reigns, and will reign forever, and has reigned over all things, ever since his ascension into heaven following his death and resurrection. It is Jesus who “was declared to be the Son of God in power according to the Spirit of holiness by his resurrection from the dead” (Rom. 1:4). It is Jesus who “must reign until he has put all his enemies under his feet . . . For God has put all things in subjection to him” (1 Cor. 15:25, 27). It is Jesus whom God has seated “at his right hand in the heavenly places, far above all rule and authority and power and dominion, and above every name that is named, not only in this age, but also in the one to come.” (Eph. 1:20-21). It is Jesus who “upholds the universe by the word of his power.” It is Jesus who, “after making purification for sins . . . sat down at the right hand of the Majesty on high” (Heb. 1:3). It is Jesus who is rightly called Lord, for he is “the ruler of kings on earth” (Rev. 1:5).