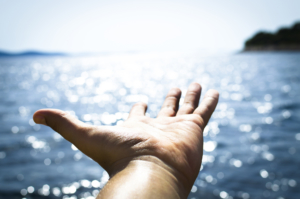 The Bible makes no secret of the fact that God works first in a sinner becoming a Christian. Conversion happens at his initiative, not the sinner’s. “So then it depends not on human will or exertion, but on God, who has mercy” (Rom. 9:16). The redeemed are those who have been “born again” (John 3:3), and their new birth was God’s doing entirely, not in response to a decision of their will. Those who have been born again “were born, not of blood nor of the will of the flesh nor of the will of man, but of God” (John 1:13).

Unregenerate people (i.e., those who have not been born again) are blind to the glorious gospel of Christ (2 Cor. 4:4; Matt. 11:25), unable to see the kingdom of God (John 3:3), and incapable of understanding the spiritual truths by which they must be saved (1 Cor. 2:14). To put it bluntly, as Paul does, they are “dead” in trespasses and sins” (Eph. 2:1, 5). As we all know to be true of dead people, resurrection is not self-initiated.

Nevertheless, just as clearly as the Bible explains man’s inability to believe, it also explains his unwillingness to believe. As John wrote, “The light has come into the world, and people loved the darkness rather than the light because their works were evil. For everyone who does wicked things hates the light and does not come to the light, lest his works should be exposed” (John 3:19-20). To the unconverted, Paul writes, “But because of your hard and impenitent heart you are storing up wrath for yourself on the day of wrath” (Rom. 2:5). Those who will be condemned are then described as “those who are self-seeking and do not obey the truth, but obey unrighteousness” (Rom. 2:8).

When all is examined and weighed, the blame and condemnation for unbelief rests not on God for withholding His regenerating power, but on man’s resistance to God’s invitations and commands. Simply put, sinners love their sin more than they want to be saved from it. They love wickedness more than the God who condemns them for it. They are enamored by this world, with its priorities and values, more than by the world to come “in which righteousness dwells” (2 Pet. 3:13). By nature, they are attracted to their guilty pleasures more strongly than they are drawn to Christ, who came to free men from slavery. Sin is what they crave. God, Christ, the gospel of grace, repentance, and righteousness, are what they are repulsed by. Unbelief is willful and worthy of condemnation, not pitiable, justifiable, or excusable.

When you compare the biblical truth concerning man’s inability to believe with the biblical truth concerning man’s unwillingness to believe, you inescapably arrive at this conclusion: Man’s inability is his unwillingness. The unbeliever does not believe because he does not want to believe. For him, believing and being saved from his sin is less appealing than the alternative of fleshly gratification through the pursuit of sin. He is, by nature, so strongly inclined toward self-seeking sinful unbelief, and so decisively turned away from repentance and faith in Christ, that it renders him unable to reverse course apart from God’s grace and mercy. He cannot repent and believe simply because he will not repent and believe. The stubbornness of his fallen nature prevents him from liking what he dislikes, loving what he hates, or submitting to what he loves to resist. He cannot, because he will not.

One way of responding to man’s inability to change his own nature and believe is to sit back passively and wait for God to do his regenerating, resurrecting work. “After all,” the sinner thinks, “if I cannot believe until God changes me, then I’ll just have to wait for him to do so.” Many unbelievers have taken this fatalistic, unbiblical approach, only to find themselves becoming more and more hardened in their unbelief and increasingly apathetic in their pursuit of truth.

The right (i.e., biblical) response to the reality of man’s inability is to recognize it for what it really is—unwillingness, rebellion, enmity against God, self-seeking hard-heartedness—and then to repent of this evil mindset and trust in Christ. The offer of salvation is made freely and repeatedly in Scripture to anyone who will repent and believe, with no indication anywhere that you should “wait for God to work.”

You cannot because you will not. But if you will, you can.