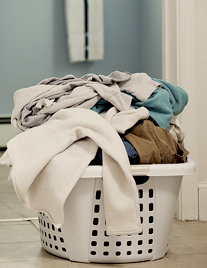 Basketball was a big part of my life while I was in high school. Practice, road trips, home games, and tournaments all had one thing in common – a locker room that smelled funky. Everyone knows that teenage boys are aromatic as it is, and when they congregate in a small windowless room, the stench escalates quickly. This is why showers are found in every self-respecting locker room.

After being washed by the shower, the boys no longer stink, at least not in the same way or to the same degree – all depending upon their grooming skill and deodorant preference. But they are washed.

Now, imagine one of the newly cleaned players ridiculing and scoffing at the smell of a group of guys who were just finishing up with practice. “You guys stink!” Forgetting that he was just minutes ago in the same sweaty condition, the newly cleaned player is hostile toward the smelly ones because they are on the wrong side of the shower. He has forgotten what he used to smell like.

At the end of a powerful argument against Christians taking other believers before unrighteous judges in civil cases in 1 Corinthians 6, Paul lists different groups of people who will not inherit the kingdom of God.

The truth of these two verses is appalling to a world in love with sin. And that love of sin is equally distasteful to Christians who love righteousness, and have forgotten what they were like. Paul knows this to be true, and the next verse addresses the reality of their forgetfulness.

And such were some of you. But you were washed, you were sanctified, you were justified in the name of the Lord Jesus Christ and by the Spirit of our God. (11).

The gospel had come to a Corinthian society that championed sexual immorality and knew nothing of Jesus. When Paul came, everyone who heard him speak was living in sin. They were all heirs of destruction, but God chose to save some of them. After Paul left, this church that had been washed was struggling with allegiance to Jesus Christ alone and was rife with weakness and immaturity. It seems that at least some of that immaturity stemmed from the believers not remembering what they used to be like before Christ—they had been just like the rest of their society.

In the locker room scenario, physical washing meant there was physical filth. Spiritual washing follows the same logic. Spiritual filth is real and it disqualifies people from inheriting the kingdom of God. All people without Christ are covered in it. You were covered in it. Immoral grime and selfish sludge oozed from your unwashed heart and, if you are honest, you have occasionally found yourself scoffing at those who reek of sin before they are washed in Christ.

The gospel crushes this sort of attitude. The washing, sanctifying, justifying work of Jesus on our behalf brings us back to reality when we overlook our past condition. We need not dwell on our past sins and dishonorable lifestyle, but a faulty view of former darkness betrays the marvelous light. The testimony of every believer is that we were dead in sin but made alive in Christ.

What about you? Do you remember what you were like? Were you a liar, unfaithful, selfish, addicted, greedy, spiteful, or drunken? Your neighbor needs you to remember correctly so that when you speak to him/her what comes out is good news, and not only judgment and doom. Please don’t misunderstand, we must honestly tell those living in unrighteousness that the wrath of God is real. They need to know the horror of their sin against God and the truth of eternal hell apart from grace, but they also need good news. Jesus Christ saves sinners! Our message is not ultimately one of condemnation alone, but of salvation.

Make it a point to consider again the grace of God in your own life. How did He save you? Where would you be presently if He had left you in your sins? Praise Him for his salvation and let that fuel your efforts with evangelism.