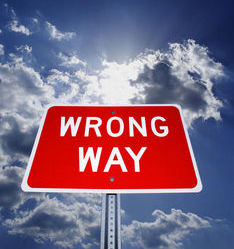 A few years ago, I was preaching in prisons in Oklahoma. In one of those prisons, I had to go into the meeting location several minutes after the pastor who had invited me. When it was time to go in, the guard opened the iron door to the prison yard and mumbled something like, “Go out there, turn there, and then you’ll see the group.” A bit confused, I walked out into the middle of the prison yard with prisoners all around, and I had no idea where to go.

Then, suddenly over the PA system, the guard blared, “YOU’RE GOING THE WRONG WAY!” Thankfully, a prisoner had mercy on me and led me to a room full of worshipping prisoners.

The Bible is a magnificent book not only because it tells us remarkable stories, but it tells us our story—and it’s very sad. Here it is, summarized as simply as possible: “YOU’RE GOING THE WRONG WAY!”

One of the writers in the Bible, Isaiah, put it like this: “All of us like sheep have gone astray, Each of us has turned to his own way” (Isaiah 53:6). God has a way for us to go, but from the moment we arrive on this earth, we prefer to cut out a new path marked by sin. This all started with Adam and Eve’s revolt against God in the garden (read Genesis 3), and it warrants eternal condemnation for each of us.

But our story doesn’t have to have to end in hell. The second part of the verse from Isaiah goes like this: “But the Lord has caused the iniquity of us all to fall on Him.” Even though the Bible reveals in vivid detail our story of enmity with God, the Bible is not ultimately about you or me. The hero of the Bible is Jesus Christ, the Son of God, Who always went the right way—God’s way. He even faced God’s wrath on the cross for sinners just like you and me, and He rose from the grave as Lord of heaven and earth. So Jesus was speaking accurately when he said, “I am the way, and the truth, and the life. No one comes to the Father except through me” (John 14:6).

A bird once flew into a church building during a Sunday morning meeting.[1] Desperately wanting to escape, the bird flew from window to window, but they were all closed! It even ascended to the ceiling looking for any way to get out, but that didn’t work either. The bird was so exhausted, it descended close to the heads of the congregation and almost gave up completely. But then, suddenly, that bird saw the one and only way of escape—an open door! Immediately, it flew through the door and was set free.

I wonder if you have been like that bird, looking for an escape from sin and God’s judgment in all of the wrong places. But there is only one way of escape—the Lord Jesus Christ. You must fly to Him, though. Repent of your sins and rest all of your hopes for forgiveness of sins and a right relationship with God in Jesus Christ alone, and you will be saved.

I read about an airplane mechanic who was called away while working on a plane, and he never made it back to tighten a particular nut. Once that plane took off, gas started to leak because of the loose nut. A fire erupted, and all seven people on the plane died. The mechanic bravely went to the funeral, and the family members of those who had died received him warmly and completely forgave him for his mistake. It must have been an incredibly touching scene.

But think about this: you haven’t just made mistakes against God, you have openly and purposely sinned against Him. But because He is love, God sent His Son Jesus Christ into the world to save His people from their sins. Since Christ paid the penalty on the cross, God forgives those going the wrong way, but only if they trust in “the way.”

“And to the one who does not work but trusts him who justifies the ungodly, his faith is counted as righteousness, just as David also speaks of the blessing of the one to whom God counts righteousness apart from works: ‘Blessed are those whose lawless deeds are forgiven, and whose sins are covered; blessed is the man against whom the Lord will not count his sin.’” (Romans 4:5-8)